Bernard Baruch played host to a variety of political dignitaries, movie stars, prominent journalists, and successful authors at Hobcaw. One of his better known guests was Eleanor Roosevelt, wife and first lady to President Franklin Roosevelt. Eleanor was a close friend and New Deal insider to Baruch, and visited him at Hobcaw in 1941. She enjoyed her time at Hobcaw very much, mentioning it twice in her popular news column My Day.

Eleanor Roosevelt is arguably one of the most well known and celebrated first ladies in American history. Serving as more than the President’s wife and New Deal insider; Eleanor redefined what it meant to be the first lady. She played the role of a gracious hostess and supportive partner as first ladies before her, but her involvement in the American press, politics, and charitable works transformed the role of the first lady into a new type of public woman. 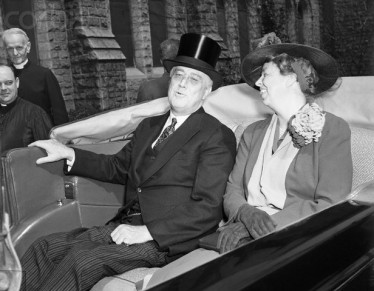 April, 13 1941-Washington D.C.- The President and Mrs. Roosevelt are shown with their Easter smiles, leaving St. Thomas’ Episcopal Church, where they heard a prayer for the defeat of “Tyranny and Aggression.”

Eleanor embraced her role in the public sphere, engaging with the press through her journalism and public engagement. This is not to say that first ladies preceding Eleanor weren’t active in the public, rather, none were as publicly independent or charged as Eleanor. Prior to her years in the White House, the press focused on the social and supportive role of the first lady. News articles would describe luncheons, receptions and family dinners, decorations, fashion etc. While these types of stories continued with Eleanor, she added another dimension to the position through her work with the press and American public.

During her twelve years in the White House, Eleanor wrote numerous articles for women’s magazines such as the Ladies Home Journal and Good Housekeeping. By the 1930’s, Eleanor was publishing her own news and advice columns, the most widely known being “My Day,” a newspaper column 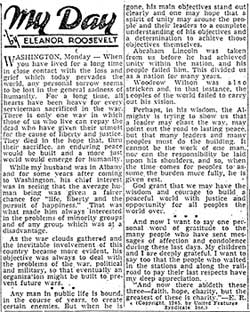 that ran from 1935 through 1962 and allowed Eleanor to reach millions of American with her views on social and political issues, current and historic events, and her private and public life.  Eleanor also wrote for general magazines such as The Nation and Reader’s Digest. She covered a variety of topics, including “softer” feminine subjects, such as “Ten Rules for Success in Marriage,” and politically progressive subjects such as the education of a daughter for the 20th century, war and post-war ideas, and even civil rights.[1] Eleanor was a successful author as well, publishing around a dozen books during her lifetime, several of which she completed during her years in the White House, including This Is My Story (1937). 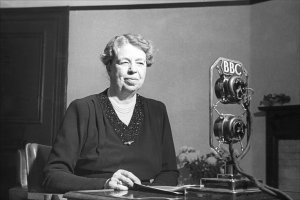 In addition to publishing numerous columns, Eleanor Roosevelt had a lengthy career as a radio commentator with her own weekly show. She is seen here giving a radio broadcast on the BBC.

In addition to her authorial endeavors, Eleanor was accessible to news journalists on a level unseen in first women before her.  She held regular press conferences and gave frequent interviews, limiting access to only women journalists. Washington bureaus had to hire women journalists so they could cover her press conferences and interviews. Eleanor took charge, daring to express her opinions publicly even if her views did not match her husbands. Unlike the first ladies before her, Eleanor wrote her own speeches and gave public statements without White House approval. Her press conferences, regular news columns, and public independence raised the expectation of the first lady’s exposure in the press and the American public.

Eleanor’s public involvement extended outside of journalism and availability to the press. She was heavily involved with a variety of charitable organizations and programs, her causes centered on her own personal interests and concerns. Advocating for the poor and minorities, one of her favorite projects was the Subsistence Homestead program.  This program sought to create self-sustaining communities in low-income rural areas. Bernard Baruch, a close friend to Eleanor and generous donor to a number of her favorite causes, publicly supported the Subsistence Homestead program. Eleanor’s involvement with charitable organizations created an expectation of civic activism in future first ladies.

Eleanor Roosevelt left behind a legacy of public independence and modern feminine ideal for future first ladies. She was a role model for other women, both in and outside of the public domain, proving that married women were capable of successfully pursuing their own interests and careers. By redefining the position of the first lady, she created a new understanding of the public woman and a set expectation for future first ladies within the public, civic, and political domain.

One thought on “Part 1: Eleanor Roosevelt, the Public Woman”