Eleanor Roosevelt’s generosity was evident during her tenure as First Lady; her active support of a variety of charities would even create an expectation of civic activism in the wives of future presidents. However, Mrs. Roosevelt’s generosity extended beyond the charities she supported; Hobcaw Barony’s own Minnie Kennedy would witness her kindness first hand. 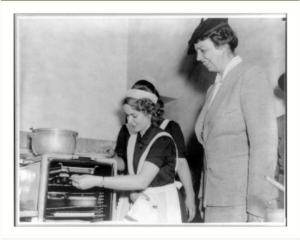 In the summer of 1960, Minnie Kennedy was working as a camp counselor in New York. In the video below she describes a field trip to the Roosevelts’ home in Hyde Park, where Eleanor surprised Minnie and the campers with her thoughtfulness.

Minnie ran into Mrs. Roosevelt again while campaigning for John F. Kennedy in Manhattan. After waiting in a reception line, Minne was formally introduced to Mrs. Roosevelt, and upon hearing Minnie’s name Eleanor shook her hand and responded, “Well, you certainly have the right name.”

Minnie Kennedy talks about Meeting Mrs. Roosevelt from Between the Waters on Vimeo.