Simon Baruch, Bernard Baruch’s father, was a prominent and controversial figure in American medicine, most recognized for his advocacy of public paths and hydrotherapy. Born a Jew in East Prussia in 1800, he wanted to be a doctor from an early age, but the practice of medicine was forbidden to Jews in his country. He was also facing compulsory service in the military if he remained in Prussia, and he had friends, the Baum family, in Camden, South Carolina, who urged him to join them. In 1855, at the age of 15, Simon Baruch emigrated to America.

Camden had a small Jewish community in those years, and most of the Jewish settlers opened stores. Herman and Mannes Baum took Simon in and he worked in the Baum general store for a short period of time. He was very bright and had no interest in storekeeping, so with the help of his foster family he began his studies at the Medical College of South Carolina in Charleston in the fall of 1860. The political atmosphere was electric across the South in the months leading up to the Civil War, but the Medical College continued its sessions as normal. 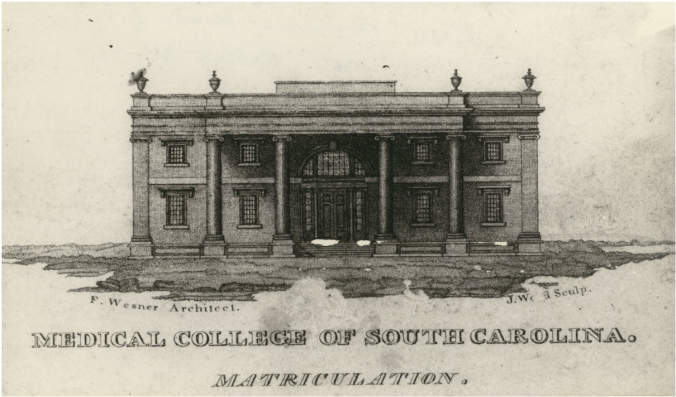 Simon entered the medical field during a period when there was little respect for physicians. Doctors faced the lasting stigma of “quackery” and therapeutic nihilism, the belief that “cures” do more harm than good and that the body is capable of healing itself through its natural processes. In the industrial revolution era of rapid technological and mechanical advancement, medical professionals faced expectations to prove the value of medical research by replacing outdated methods. The curriculum at the Medical College was considered both enriching and controversial. Discussions of proper surgical technique were often disputed and biased towards individual preference, and the use of drugs was hotly debated. Pathology, a science that had advanced in France in the earlier part of the 19th century, offered new approaches to the study of disease, opening the way for concepts that were quite different from those that had prevailed before them.

Medical students faced a series of challenges outside of their heavy course loads and the evolving medical field. Air conditioning and refrigeration were not available in the 19th century, and formaldehyde was not used until the 1890s; “anatomical teaching” through the dissection of cadavers was an unpleasant  task even in the coldest months. The Medical College did its best to compensate for the challenges presented by Charleston’s sub-tropical climate, and in 1859-1860 the College renovated and enlarged the Anatomical Theatre, where demonstrations were held before audiences of medical students, to improve ventilation. Medical students also faced exposure to infection and other illnesses through their studies. It was not uncommon for medical classes of that period to lose several students each year to communicable diseases.

Simon Baruch was unable to finish his education in Charleston. After the start of the Civil War on April 12, 1861, many of the faculty and students left to join the Confederate States Army, and the Medical College of South Carolina ceased operations for the duration of the war. Upon learning that the Medical College of Virginia would remain open, Simon decided to continue his education there, and received his M.D. on March 6, 1862. 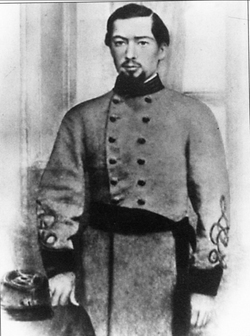 A young Simon Baruch in his Confederate uniform. Date unknown.

Simon Baruch had left Prussia in part to avoid military service, but now – fresh out of medical school – he faced a civil war in his adoptive country, and less than month after his graduation he joined the Confederate Army as an assistant surgeon. “South Carolina gave me all I had,” he said. “I’ll go with my state.” (25) Simon joined the war having never treated “a sick person or even having lanced a boil.” (24) Needless to say, the Civil War gave him the practical experience he never received in medical school.

While attached to James’s Battalion of Kershaw’s Brigade of McLaws’s Division of Longstreet’s Corps of the Army of Northern Virginia, Simon was tasked with caring for the physical well-being of five hundred infantrymen who were, at various times and to varying degrees, inadequately clothed, ill-fed, unbathed, and constantly exposed to infections and diseases. His experiences with James’s Battalion, and throughout the rest of the war, would impress upon him the importance of cleanliness and hygiene, something he would advocate for throughout his career. He had a clear sense of how important it was to keep things sanitary, so he washed his hands and sterilized his instruments, practices that were considered odd at the time.

During his service in the Confederate Army Simon Baruch fought in a number of battles, including Manassas and Gettysburg, and treated hundreds of men. Their injuries often consisted of shattered and splintered bones, and the risk of infection was great.  Amputations were the most common and frequent solution, and Simon Baruch quickly became familiar with the operation. The “vast area of laceration and the track, altogether out of proportion to the caliber of the projectile itself, soon convinced surgeons that early amputation to avoid infection was the only hopeful course. The probability of hospital gangrene and other prevalent sequelae to amputation increased markedly if an operation was delayed more than twenty-four hours after the wound occurred.” (34) 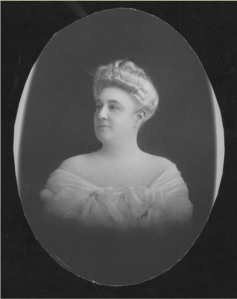 At the end of the war Simon Baruch returned to South Carolina, established a medical practice, and married 17 year-old Isabelle Wolfe of Fairfield County, a niece of Mrs. Mannes Baum. Although Isabelle’s family was deeply in debt after the war, they were landowners and former slaveholders, an old Sephardic Jewish family with deep roots in South Carolina.

Simon and Isabelle Baruch made their home in Camden and had four sons: Hartwig, Bernard, Herman, and Sailing. The effort to establish a medical practice and raise a family in the small, impoverished town was frustrating for the young doctor. Simon’s patients largely consisted of poor whites and freed blacks, many of whom were unable to pay him for his services. Like many Southern whites during the Reconstruction era, he laid the blame for his economic problems on the Radical Republicans and freedmen and felt the need to regain control. “I am not willing to submit when I have a remedy left,” he wrote to a colleague. 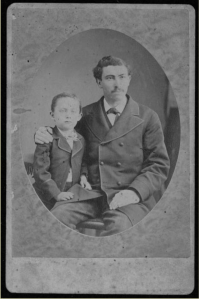 A c. 1880 photograph of Simon Baruch and one of his patients, Arthur Fishel Samson Jr. Photo Courtesy of the Georgetown County Digital Library

Although he made enough money to provide for his wife and children, Simon Baruch yearned for a “respectable practice,” and in 1880 he and his family left Camden for New York City. Shortly after his move to New York, Simon made a name for himself by diagnosing a case of perforated appendix that was successfully treated surgically, and was one of the first operations of its kind.

Simon Baruch had become aware of the inability of the poor and immigrants to bathe themselves when he served as a dispensary physician in one of New York’s most notorious slums – Hell’s Kitchen – during a brief stint in New York after the Civil War. The crowded tenement apartments where many immigrants lived had no bathrooms. The usual source of water was in the hallway, so to take even a sponge bath residents had to carry a bucket of water from the hall sink to the stove. Not surprisingly, mortality rates in the tenements were much higher than for other city dwellers.

It was in New York City, where millions of immigrants would arrive from Europe over the next few decades, that Simon Baruch became a passionate advocate for public health and hydrotherapy. He had served as a dispensary physician in one of the city’s most notorious slums – Hell’s Kitchen – during a brief stint in New York after the Civil War. The crowded tenement apartments where many immigrants lived had no bathrooms, and the usual source of water was in the hallway, so to take even a sponge bath meant carrying a bucket of water from the hall sink to the stove. Not surprisingly, mortality rates for residents of the tenements were much higher than for other city dwellers. Baruch worked for years to establish public bathhouses in New York City. In 1901 the city opened its first municipal public bath house on Rivington St. on the Lower East Side. In 1917 the city dedicated the building to Simon Baruch, honoring him as a leading proponent of making good hygiene available to everyone. 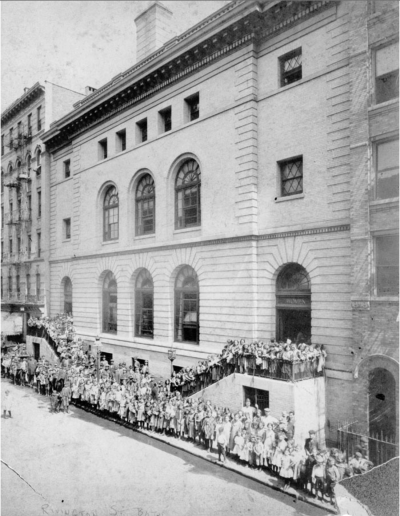 Baruch’s work made him a prominent and controversial figure in American medicine. His promotion of hydrotherapy and other treatment methods designed to encourage the body’s natural healing process gained him a reputation for nihilism among his colleagues, who increasingly relied on surgical, bacteriological, and pathological solutions. However, Simon believed that the beneficial physiological effects of water therapy could be established on a logical, scientific basis, and he published several articles and books on the subject. 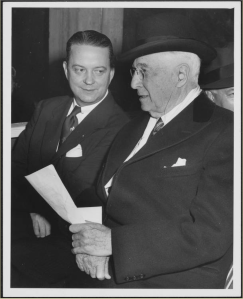 Bernard Baruch continued his father’s legacy, giving generously in support of medical practice and research. In the 1920s he funded a hospital in his hometown of Camden, South Carolina. Seeking to advance his father’s work in the use of hydrotherapy for rehabilitation, he became a major benefactor of New York University’s Institute of Physical Medicine and Rehabilitation, founded by Dr. Howard Rusk, a leader in the development of rehabilitative medicine. Following her father’s philanthropic direction, in 1958 Belle Baruch dedicated a room at the Institute in honor of Edith Boling Wilson’s 85th birthday. Annie Baruch also supported the medical field, funding Doctors Hospital in New York City. The Baruchs’ philanthropy extended to other areas as well, including Bernard’s significant support of his alma mater.

Source: Simon Baruch Rebel in the Ranks of Medicine, 1840-1921 by Patricia Spain Ward