In a widely publicized 1949 photo, Bernard Baruch and Winston Churchill talk near the stone wall at Chartwell, Churchill’s country home in England. Churchill visited Hobcaw in January 1932 and is rumored to have returned during President Roosevelt’s visit in April 1944. The photo is signed, “To Belle, from Chick, B.M. Baruch, 1949.” Photo courtesy of the Belle W. Baruch Collection, Georgetown County Digital Library.

Politics, as the saying goes, makes for strange bedfellows.  So too did the mingling of people and ideologies that occurred as coastal South Carolina became a winter haven for wealthy, powerful people from afar.  For decades, lowcountry people have used the phrase “Second Yankee Invasion” in referring to a wave of land purchases and estate-making efforts that took place in the twentieth century, mainly between the world wars.  Wealthy sporting enthusiasts from northern cities bought old plantations and turned them into private hunting preserves, seasonal residences, and venues for entertaining friends and family.  In creating Hobcaw Barony, Bernard Baruch established an early example.  In later years, others followed suit.  As they did, debates about the major issues of the day found their way into lowcountry newspapers, discussions among neighbors, and casual conversations at church suppers, weddings, and a host of similar events. 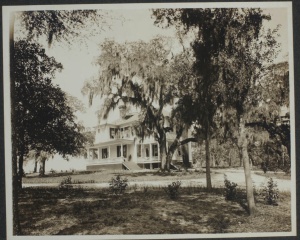 Bernard Baruch and his family initially used the two-story, Queen Anne-style residence shown in this photo for lodgings during their stays at Hobcaw Barony. Built circa 1890, it typified the casual, unpretentious atmosphere associated with northerners’ early activities in the lowcountry. By the late 1920s, northerners routinely erected grand Colonial Revival-style mansions and restored pre-Civil War houses to their original splendor. Photo courtesy of the Belle Baruch Collection, Georgetown County Digital Library.

Like most dimensions of the Second Yankee Invasion, its politics are known mainly through impressionistic assessments rather than serious study.  Many accounts emphasize tensions between estate owners and locals and the “outsider” status of the former. These views are not inaccurate but lack context and grounding. They fail to explain the interests of either group and the general pattern of interaction between the two.  Moreover, they present each as monolithic.  Estate owners, for their part, formed a diverse lot.  Some possessed power and influence while others had relatively little.  None sought to affect significant changes in the Lowcountry.  Existing social and environmental conditions proved crucial to the reasons they found the region appealing.  Moreover, despite apparent tensions between estate owners and lowcountry residents, symbiosis more than antagonism characterized relations between the two groups.  Superficial rhetoric and occasional friction notwithstanding, lowcountry natives and northerners developed relationships of mutual accommodation.  Lowcountry elites especially viewed the newcomers favorably, for they gave tacit sanction to claims about the region’s aristocratic traditions and the refined tastes of their ancestors.

Baruch became a focus of discussions about estate owners’ activities and interests early on.  Because of his personal ties to South Carolina and his stature in American life, he aroused less suspicion than some estate owners.  Moreover, his interest in aiding economic development in his native state endeared him to lowcountry people.  In using Hobcaw Barony as a venue for entertaining friends, family, and business associates, Baruch generated a steady stream of news.  The list of those he and his family hosted at Hobcaw is legendary; It included journalists such as Arthur Krock, Westbrook Pegler, and Herbert Swope; New York World publisher Joseph Pulitzer; famed horse trainer Max Hirsch; the author Jack London; New Deal administrator Harry Hopkins; and politicians such as U.S. Senator Joe Robinson of Arkansas. 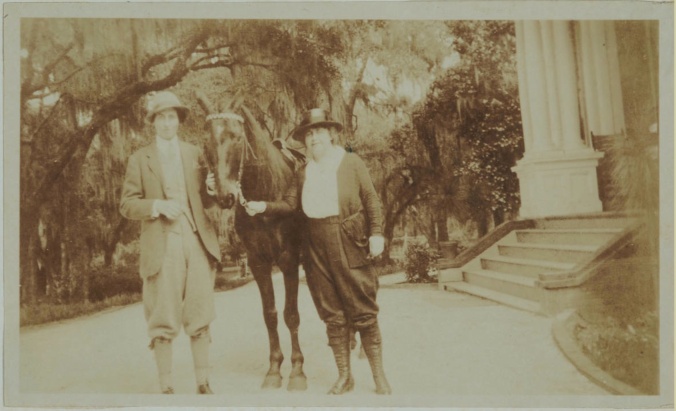 Edith Wilson, Woodrow Wilson’s widow, and her brother visited the estate in February 1925, and Winston Churchill and his daughter Dianna stayed briefly in 1932.  U.S. Senator Key Pittman of Nevada and New York Supreme Court Justice Richard Lydon were at Hobcaw in December 1929 when fire consumed the “Old Relick,” the house that Baruch and his family occupied throughout the 1910s and 1920s.  The most closely watched visit occurred in April 1944, when President Franklin Delano Roosevelt came on orders from his doctor.  Exhausted and in poor health, the president intended to stay at Hobcaw for two weeks but found it so enjoyable that he stayed for a month.

Although Baruch’s guests drew copious attention, others who came to the Lowcountry also attracted interest.  Visits by prominent socialites, politicians, and government officials made headlines.  In December 1933, for example, the Charleston News and Courier noted the arrival of Barbara Hutton, an heir to the F.W. Woolworth five-and-dime store fortune, and her husband, Prince Alexis Mdivani of Georgia.  The couple came to visit Prospect Hill Plantation, the winter estate owned by her father, financier Franklin L. Hutton.  Two years later, the newspaper highlighted a visit by Assistant Secretary of the Navy Henry LaTrobe Roosevelt to Gippy Plantation, the Cooper River estate owned by his brother, Nicholas.  News about the creation of new estates also sparked interest.  The News and Courier, the Georgetown Times, the Beaufort Gazette,the New York Times, and magazines such as Country Life and House Beautiful all publicized development of new “plantations” devoted to upper-class leisure and restoration.

Daniel Vivian is a historian of the American South.  He earned his PhD at the Johns Hopkins University and has taught at the University of Louisville since 2010.  He is currently revising his dissertation, “The Leisure Plantations of the Carolina Lowcountry, 1900-1940,” for publication.  His writings have appeared in the New York Times, Winterthur Portfolio, Ohio Valley History, and the South Carolina Historical Magazine.

2 thoughts on “Guest Post: Politics and Plantations in the Lowcountry – Understanding the “Second Yankee Invasion” (Part One)”