At the turn of the nineteenth century, a woman’s place was still considered to be in the home, school, or church. However, this philosophy was beginning to shift, and by the early twentieth century, women began moving into the public domain, earning an education, and thanks to industrialization, working outside the home. The women’s suffrage movement was gathering speed and support, many felt the right to vote was within reach. An independent and educated figure known as the New Woman was emerging, and she was ready to serve alongside her American brothers in the Great War.

Textile factory with two women at machines, ca. 1910. Photo courtesy of the Library of Congress 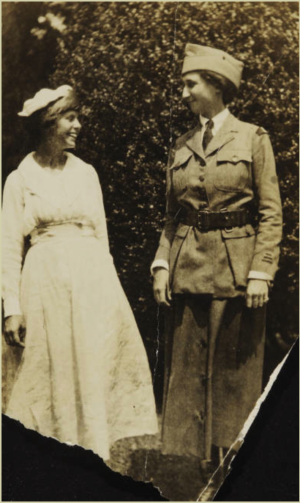 A Red Cross volunteer, most likely a friend, and Belle Baruch, a volunteer with the Women’s Radio Corps, pose in uniform. Photo courtesy of the Georgetown County Digital Library.

Women had worked in all American wars, often following their husbands and serving in as nurses, cooks or laundresses, but their military experiences expanded significantly during WWI. Most notably, the military opened enlistment to women for the first time in American history. Though the majority of women still served as nurses through the American Red Cross or the Army Nurse Corps, many also worked as administrators, secretaries, telephone operators, interpreters and translators, librarians, canteen workers, entertainers, and in various other positions. Approximately 25,000 women served during the Great War through volunteer organizations such as the American Red Cross, the YMCA and the military. For the first time, these women were overwhelmingly middle and upper class. One of them was Belle Baruch.

At  the onset of the war, Belle immediately volunteered with the American Red Cross,
but the that kind of work proved to be too tame for her. Wanting more of a challenge, she joined the Women’s Radio Corps, a branch of the Army Signal Corps, under the supervision of Director Edna Owen.

“Belle studied radio telegraphy, qualifying quickly for her first-grade commercial license. She was appointed junior inspector of radio material for the US Signal Corps and taught Morse code at two aviation camps. (Years later, while Belle was entertaining David Sarnoff, president of the Radio Corporation of America, the two spent the evening tapping out jokes and messages in Morse. Sarnoff, it seemed, had served as a wireless operator early in his career.)” 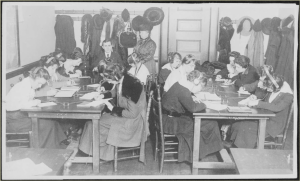 In a 1918 photo, Belle Baruch, front center, in fur trimmed coat, is a student in a radio class at New York’s YMCA on East 86th Street. Belle quickly qualified for her first grade commercial license. Photo courtesy of the Georgetown County Digital Library.

Belle was one of many of the thousands of women who served in the American military during the Great War. More than 10,000 nurses served in Europe in the Army and Navy Nurse Corps; the Navy enlisted approximately 13,000 female Yeomen; and the Marines enrolled 305 women in the Marine Corps Reserve. The Army Signal Corps trained 450 civilian women as telephone operators, affectionately christened “Hello Girls,” and sent 223 of them abroad to work the army switchboards.

Many women were treated as equals and enjoyed the same rank and pay as their male counterparts. Secretary of the Navy Josephus Daniels ordered that female Yeomen earn the same pay as men of equivalent rank, starting at $28.75/month. Women also received a uniform allowance, war risk insurance, and medical care. Women who enrolled into the Marine Corps Reserve also received equal treatment. All female recruits earned the same pay as the enlisted men of corresponding rank: private, $15 per month; private first class, $18; corporal, $21, and sergeant, $30. When women were disenrolled from the Navy and Marines after the war, they received the full veterans’ benefits and a WWI Victory Medal. 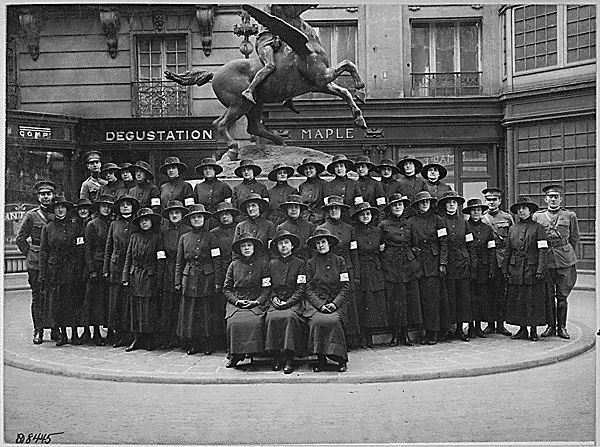 American telephone girls on arrival for “hello” duty in France. They all can speak both English and French, c. 1918. Photo courtesy of the National Archives.

Unlike the Navy and Marines, the Army did not grant its female recruits the same authority, pay, or, as with the case of the Hello Girls, veteran status, as they did to male recruits. Upon returning home after the end of the war, veteran Hello Girls were shocked to find out they weren’t eligible for honorable discharge, benefits, or a medal of service. Though the official authorization creating the telephone units intended for women to be civilian employees of the Army, the women believed they had enlisted as official members of the military. The resulting confusion led to a sixty year struggle between the Army and the Hello Girls. It wasn’t until 1977, when the youngest Hello Girl was nearing eighty, that the women were approved for veteran status under S. 1414, the GI Bill Improvement Act.

Although female nurses in the Army Nurse Corps were enlisted as official members of the military, they, “did not have the authority, prestige, security of rank or appropriate pay. They were neither officers nor noncommissioned officers during the Great War. Although they were given ‘relative rank’ in name only in 1920, they did not receive pay, status, or benefits equal with men until 1944.” (American Women in WWI: They Also Served by Lettie Gavin, 44)

An Army nurse assists with treatment of a patient during World War I. Photo courtesy of the Department of Defense.

The struggle for equality was even greater for black nurses. Although an estimated 1,800 black nurses were certified by the Red Cross for duty with the military, only eighteen were called up for service, and only after the Armistice was signed in November of 1918. These eighteen women were the first black women to serve in the Army Nurse Corps, but none were ever sent to Europe, and none received any benefits or pension from the Army because they were sworn into service after the Armistice. In fact, only five or six black women succeeded in making it overseas to help during the war; the YMCA sponsored four women, and in the last months of war a professional black pianist, Helen Hagan, was permitted to entertain soldiers in Europe. A black woman doctor may have also gone overseas, but this is non-confirmable.

Regardless of the challenges and barriers facing women during the Great War, they served enthusiastically and proudly alongside their brothers in arms. Their service opened up jobs that had previously been considered inappropriate for women, thereby increasing opportunity for financial independence. After the war, women would see growing support for the suffragist movement, rising hemlines, and shorter hair styles. Arguably, women’s participation in WWI further reinforced their position in American society, helped secure the Nineteenth Amendment and the right to vote, and hastened the already shifting philosophy that a woman’s place was in her home. 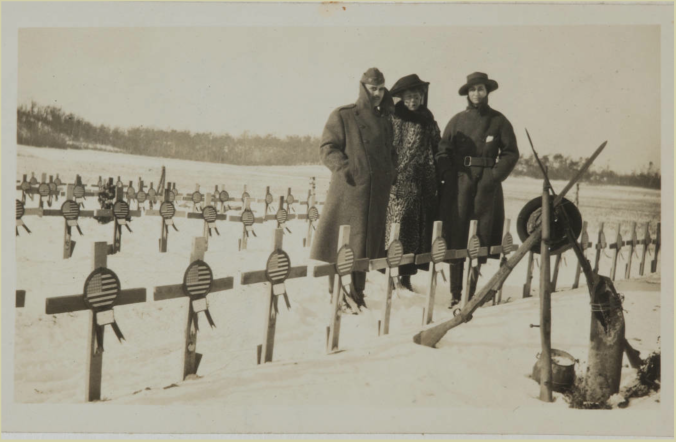 Marine Captain Ed Chamberlain, Mrs. Coster and Belle Baruch stand at the cemetery in Belleau Woods, France, where nearly 3000 U.S. Marines had been buried during World War I. Belle accompanied her parents to the 1919 Paris Peace Conference and toured battlefields while in France. Photo courtesy of the Georgetown County Digital Library.

In 1919, Belle traveled with her father to the Paris Peace Conference. She toured the French countryside, visiting graves, battlefields, and rubble strewn towns, witnessing first-hand the devastating aftermath of war. Belle’s political awareness was awakened in France, and when she returned home, she became an active supporter of the women’s suffrage movement. Belle joined the fight for women’s rights as eagerly as she had joined the Women’s Radio Corps, just as many women did after the war.

Into the Breach: American Women Overseas in World War I by Dorothy and Carl J. Schneider

American Women in World War I: They Also Served by Lettie Gavin

Women in World War I, Exhibit by The National Museum of American History

One thought on “American Women in the Great War”