Authors of several biographies of members of the Baruch family portray them as assimilated Americans of Jewish descent.  How this came to be is not thoroughly discussed, which is strange considering that Bernard Baruch’s maternal great-grandfather was Reverend Hartwig Cohen, spiritual leader of Charleston’s Kahal Kadosh Beth Elohim congregation.  Bernard Baruch does not allude to this connection within his autobiography, Baruch: My Own Story, but he makes several statements that can serve as points of departure for further analysis.  We may assume that the assimilation process was gradual, in contrast to a complete break with tradition, considering the infrequent interaction between Baruch family members and those who more readily identified with being Jewish.  As of 1905, when Bernard Baruch began purchasing land that comprised Hobcaw Barony, he and the other members of his immediate family had minimal social interactions with the Jews of Georgetown and Charleston, South Carolina.  For example, they did not participate in communal functions with local Jewish congregations or socially engage with most Jews in these cities.  However, at the same time, the Baruchs could not escape their ancestral patrimony.  Many of the public at large, both in the United States and abroad, considered them to be Jewish.  As a result, the Baruchs encountered anti-Semitism and discrimination at various moments in their lives.

Besides having minimal social interactions with their fellow Jews, the Baruchs also rarely associated with African Americans in South Carolina and elsewhere.  Although Bernard Baruch employed many African Americans at Hobcaw Barony, this was predominantly an employer-employee relationship where he, and later his daughter Belle, held substantial power over their daily lives.  This is not to say that they did not care for the African Americans that worked for them, but rather that the patriarchal Baruchs saw themselves as socially superior–even beyond their economic differences.

Simon Baruch in uniform as a Confederate Assistant Surgeon, painted by an unknown artist sometime between 1862 and 1864. The bars on his collar signified medical rank equivalent to that of captain or calvary. Photograph scanned from cover of Patricia Ward’s book “Simon Baruch: Rebel in the Ranks of Medicine, 1840-1921” (University of Alabama Press, 1994).

Certain events in Bernard Baruch’s life shaped his identity and circumscribed his later relationships with other Jews and African Americans.  First, Bernard Baruch’s childhood took place in late-Reconstruction South Carolina, an era marred by land disputes; racial violence; and political strife between those who harbored an emancipationist vision for America’s future and believers in white supremacy and a return to a society that closely resembled the old order.  Baruch’s father, Simon, was a Confederate veteran. One day while rummaging through the attic in the family home, Bernard and his brother, Harty, found Klan regalia next to their father’s Confederate uniform.  In his autobiography, Baruch recalled being impressed by what he found; he did not abhor it.  Although the late-19th century Klan had taken a position of anti-Semitism, some Jews joined its ranks.  Simon Baruch, in this case, was much like his fellow white neighbors who feared and sought to suppress African Americans, who formed a numerical majority in Kershaw County, South Carolina. 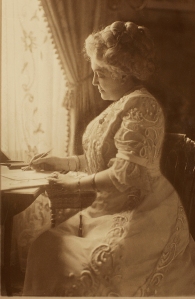 A native of Fairfield County, South Carolina, Isabelle “Belle” Wolfe was a child of slaveholding parents. At the age of 16, shortly before the close of the Civil War, she married Dr. Simon Baruch and bore him four children. Photo courtesy of the Georgetown County Digital Library, Georgetown, SC.

Such beliefs would not have been challenged by Baruch’s mother, Belle Wolfe.  Born to a family whose lineage stretched  back to the 1600s and the daughter of slaveholders,  Wolfe seems to have embraced her role as a southern woman in an aristocratic family. Even after slavery ended, she continued to retain “habits of luxury” linked to her previous status as a  future mistress.  Baruch writes, “Up to the time of Sherman’s raid, Mother’s family had been so well off that she had never even dressed herself…One habit of luxury Mother retained…She always had breakfast in bed.”  Aside from these observations, Wolfe does not feature as prominently in Baruch’s autobiography.  His chapter on his maternal ancestry, entitled “Some Colonial Ancestors” focuses largely on male ancestors and in later chapters he discusses men in his life who impressed him.  Bernard Baruch embraced their racial attitude and political ideology throughout much of his public life.

Baruch’s parents also influenced his attitude towards religious observance and Jewish culture.  Despite her family’s acculturation into American society, Judaism remained an important part of his mother’s identity.  Baruch explains that moving to New York, “gave Mother the satisfaction of being able to worship in a synagogue.  Camden had not had one and Mother’s opportunity to attend services had been on occasional trips to Charleston.”  Simon Baruch, however, had a very different outlook.  His biographer Patricia Ward describes him as “an agnostic and a reformed Jew, less concerned about his Sephardic ancestry than about his role as a citizen in the communities where he later made his home.” This inconstant observance of Judaism affected Bernard Baruch’s life in a variety of ways.  In addition to his limited relations with other Jews, Baruch was free to marry outside the faith.  In his biographies, the only objections to his marriage to Annie Griffen were raised by her father, the grandson of an Episcopal minister.  If Bernard’s parents opposed their marriage on similar grounds, they either did so quietly or their objections were stricken from the historical record.  Considering that Bernard’s other siblings married non-Jews, we can assume that any disapproval expressed by Simon and Belle was short lived; The extended family maintained positive relations with their Jewish kin well after the birth of many grandchildren.

However the situation may be more complicated than Ward acknowledges. Completely missing is any study of the Haskalah, the Jewish Enlightenment that swept much of late 18th and 19th century Europe, which sought to integrate Jews into mainstream society through intellectualism and practical, secular education.  In Europe, participants in the Haskalah supported emancipation for all.  Upon leaving their homelands and arriving in the northern United States, many Central European Jewish immigrants adopted the social values of their new homes.  Likely a product of this movement, Simon Baruch migrated to a region with very different social, political and economic values.  Transplanted as a young man into the late Antebellum American South, he was subsequently caught up in the whirlwind of the Civil War and Reconstruction.  Unlike his counterparts, who migrated to a region largely devoted to ideals of free labor, Baruch’s father assimilated by entering the medical profession, marrying into a prosperous slaveholding family, and enlisting into an army organized to defend slavery and states’ rights.  In fact, Baruch explains that “[e]nlisting in the Confederate Army was the natural, human thing for father to do.  Like so many others, including Robert E. Lee, who neither owned slaves nor approved of slavery, father felt his first allegiance to be to his adopted state [of South Carolina].  Moreover, nearly all the youths he knew in Camden were enlisting.”  It seems that Simon’s newfound southern identity, in addition to his personal desire to sustain his upward mobility, were the reasons for his enlistment into the Confederate Army and greatly influenced Bernard Baruch’s later attitudes toward race and religion. 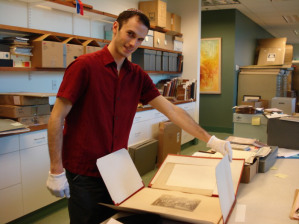 Barry L. Stiefel is currently a Visiting Assistant Professor of Historic Preservation and Community Planning at the College of Charleston in Charleston, South Carolina. He is the author of Jewish Sanctuary in the Atlantic World: A Social and Architectural History published by the University of South Carolina Press, for which he received the 2009 Carolina Lowcountry and Atlantic World Program Hines Prize for best first book manuscript. He also co-edited Preservation Education: Sharing Best Practices and Finding Common Ground, with University Press of New England.  Stiefel seeks to uncover how local preservation efforts affect regional, national, and multi-national policies within the field of cultural resource management and heritage conservation.  Dr. Stiefel can be reached at  bstiefe@clemson.edu or https://cofc.academia.edu/BarryStiefel.

One thought on “Guest Post: “Origins of Jewish and African American Relations of the Baruchs of Hobcaw, South Carolina””